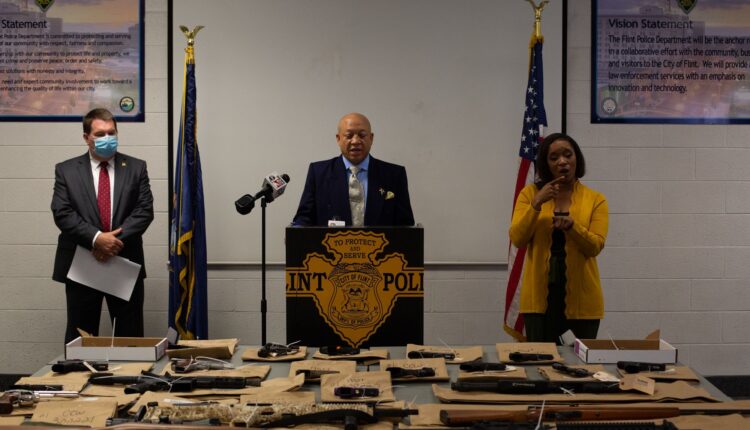 City of Flint to stop auctioning off illegal guns

Flint, MI–Pastor Jeffrey Hawkins said at a press conference this afternoon that today marked his second son’s birthday who he lost to gun violence.

Today is also the day Mayor Sheldon Neeley and Police Chief Phil Hart announced that the City of Flint will no longer be auctioning off the illegal guns confiscated by the police.

250 guns seized from the streets of Flint will now be taken to the Michigan State Police Department to be melted down.

“It shows a gross lack of critical thinking when we say we want to fight crime and battle crime and take weapons off the street,” Neeley said, “to be in the chain of circulating weapons back into activity where bad guys may…get a second chance at doing something wrong.”

There were 1,273 weapons auctioned off in the previous years by the previous administration which totaled more than $200,000. That money went back into the police department.

“But we have to ask ourselves, how much is a life worth?” Neeley said.

A table full of weapons old and new was on display at the press conference.

“You see these long guns, these shotguns, these semi-automatic weapons,” Neeley said. “These look more like combat types of weapons and in an inner city area, I mean, these weapons can be devastating.”

Gun violence in Flint is on the rise.

Over the weekend, a dozen people were shot. Hart said there have been a couple more shootings since then.

“We’re going nightly out to shooting scenes, and this past weekend was just horrible for all of us,” Hart said. “We would like to never have anything like that happen again.”

Hart said those guns had been collected in just the last seven days from the new Special Investigative Unit in the Flint Police Department, which is one part of a three-part plan to combat the rise in violent crime.

According to Hart, the weapons were seized mostly during legal traffic stops as the unit exercised proactive policing and something they call “Beyond the Stop.”

Hart also announced that the department is investigating where the new guns came from and what institutions are putting those guns into the hands of people who shouldn’t have access to them.

“We are no longer going to put these weapons back out on the street for sale. It’s just not worth it,” Hart said.

Joseph Pettigrew, who lost his father in a shooting, called gun violence a public health crisis.

“I would like to see more…young people stepping up to really make sure that our families and friends are safe,” he said. “This work cannot be done without the community.”

Hawkins said this decision not to auction off the guns gives him hope.

“This doesn’t do anything for the loved ones that were lost due to violence, but sure enough this gives us a brighter future that no one else has to be lost, particularly by these guns,” he said.