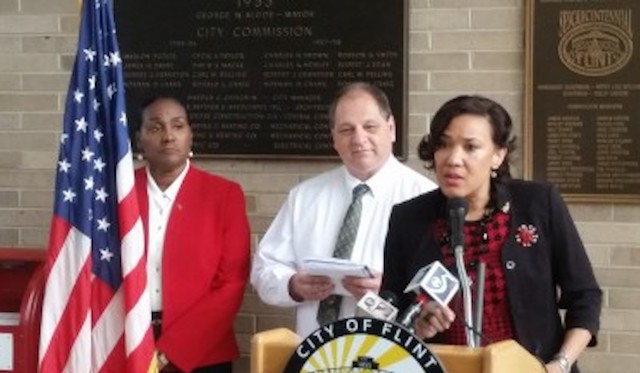 FLINT, MI – Workers and officials of a program to make sure Flint residents are properly using water filters will be available for questions during a Wednesday morning press conference.

Mayor Karen Weaver and program officials are holding a press conference at 10 a.m. on March 15, 2916 at the City Hall auditorium to update the public on the Community Outreach and Resident Education program also known as CORE.

“Mayor Weaver wants residents to know more about the CORE workers, the job they’ve been assigned to do and how they can help,” said a March 14, 2017 press release from Flint spokeswoman Kristin Moore. “Workers and leaders of the program will be on hand Wednesday to answer questions and provide information in hopes of easing concerns residents may have about answering the door the next time workers are in their neighborhood.”

CORE launched last year. In December, Weaver announced that the program was expanding and officials were looking to fill 160 Flint water crisis jobs paying between $12 to $15 per hour.

“Their mission is to help make sure Flint residents are informed how to properly install and maintain water filters in their homes,” “Workers have knocked on more than 80,000 doors, but there are concerns about the number of residents workers have been able to actually reach and talk to.”

Weaver, CORE Program Director Paul Newman and program employees are expected to be at the Wednesday morning press conference.