FLINT, MI — It’s like being naked in front of strangers, people seeing little details of your life that they never had the privilege of knowing. “Flint Town” takes viewers from the gritty streets of Flint as police officers canvass neighborhoods with little to no manpower into cops homes introducing us to a world that most never think about. 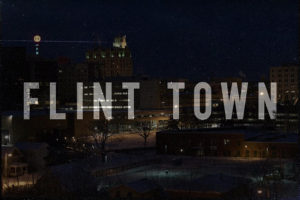 Cops are stripped of their blue uniforms becoming something we can relate to – human.

“Flint Town,” an eight-part documentary, premiered on Netflix on March 2, 2018. Directors Zackary Canepari, Drea Cooper, and Jessica Dimmock were boots on the ground in Flint for nearly three years as they worked on the documentary focused on the Flint Police Department. There are no actors in this piece, something that may have been long overdue for the city to keep the spotlight on Flint as the community continues to recover from an ongoing water crisis.

The department has been undermanned for years leaving a city with an estimated 100,000 residents with just shy of 100 officers policing its communities. “Flint Town” documented Flint PD’s struggles to patrol the city, officers facing internal racial tensions, dealing with community fears and maintaining personal lives outside of the office.

Filmmakers began with former Police Chief James Tolbert’s tenure prior to the November 2015 elections when Flint Mayor Karen Weaver nabbed the city’s top seat from Dayne Walling months after it was announced that nearly 100,000 residents in Flint were exposed to toxic water. The documentary navigates through the department’s transition as it comes under Flint’s current Police Chief Tim Johnson who was appointed by Weaver to take over Flint PD in 2016.

In recent years Flint has been named one of the nation’s most dangerous cities and in 2017 it was said to be one of America’s poorest cities.

Though “Flint Town” displays some of those moments that have been embraced by media that shows another blemish for predominantly Black and poor communities like Flint we realize that those stories exist and there are systemic and public health issues that need to be looked at continuously in Flint.

As I finished episode eight, I wanted more for some reason. I was left with a newfound respect for some officers but also an eerie feeling of dread at the thought of others pulling me over.

But in being able to witness intimate moments that the women and men in blue have, all and all I realized, hell cops are just people. They have children, take vacations, sing, preach, and whether people know it or not some even give a damn about this city we call Flint.