Those first few weeks of Michigan’s stay-at-home order turned into months, and pretty soon Burt, along with so many others, realized the COVID-19 pandemic and the effects that came along with it would be sticking around longer than originally expected. This clearly would not be a month-long affair.

Then, one night, like any of the other forgettable nights that have turned into a quarantine blur, Burt read a New York Post article that inspired him to re-assess the possibility of a social distance friendly restaurant.

“Most of my good thinking comes right before I fall asleep. I was just perusing through my phone and I opened this article up. It was about a restaurant in Amsterdam, a very classy restaurant with very beautiful glass greenhouses along a river. It was gorgeous,” Burt said.

In an effort to provide service and social distancing measures, the restaurant built miniature greenhouses that kept diners separated.

The story made Burt ask himself why something like that couldn’t happen in Flint. Especially if, in his words, a bit of “Flint flair” was added.

“We have just as much innovation here and pride in our city as anywhere else in the world. I didn’t let the fact that this happened all the way in Amsterdam make me think that I couldn’t pull it off on Martin Luther King Avenue,” he said.

The next morning, Burt reached out to Jon Mason, owner of Above and Beyond Concepts and Recycle Bike Shop.

Mason had played a key role in getting the FCHC building ready for its grand opening. He helped Burt get all the necessary permits and helped him cut through all of the red tape associated with opening a brewery.

“We got him open for two days,” said Mason with a chuckle.

“Out of nowhere about two weeks ago he (Burt) called me and said ‘hey, I have this idea, I think it’s crazy. I’m going to send you a picture, let me know what you think,’” Mason said.

Mason was immediately on board when he saw the greenhouse concept. His love for recycling and repurposing paired with Burt’s limited budget of $600 made for a shopping challenge à la “American Pickers.”

Unlike the show, however, Mason didn’t sift through a barn looking for the right materials to build the dining areas. Instead, he ended up buying an old barn’s roof and a corn crib (think something along the lines of a silo).

“We put the two of those together to fashion four huts. I call them fruit stands or social distance huts,” Mason said. The fruit stand idea came from FCHC’s relationship to Porter’s Orchards in Goodrich, MI. The stands were designed to give off the feeling of being inside an old barn after picking apples.

Before the week’s end, Burt had a dining area. “We built one on Monday, one on Tuesday, one on Wednesday and one of Thursday, all from recycled material,” Mason said.

Burt had his dining area and he had his drink. Now was time for the food. 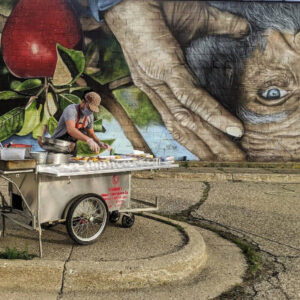 This is where Tony Vu, owner of the Flint Farmer’s Market restaurant, Ma Mang, came in. Both Ma Mang and Vu’s other restaurant, The Good Bowl in Traverse City had been operating through the pandemic.

His experience dealing with the increased safety regulations imposed on restaurants made Vu the perfect candidate to handle the meticulous task of preparing the inaugural night’s three-course meal.

On top of this, Vu’s diverse culinary expertise and connections to local talent through the Flint Social Club like chef Joe Boike, best known for his work at Chicago’s BOKA and North Pond restaurants, made for the spread of every gourmand’s dream.

“Tony Vu was the first person I thought of as far as somebody that could pull off something really cool and unique, something that would compliment the cider,” Burt said.

What did the hour-long three-course meal look like? The evening consisted of a Viet-Cajun low country boil with crawfish, accompanied by Argentinian shrimp with kielbasa, new potatoes and corn in a ginger lemongrass butter.

Of course, the experience could not be complete without music to add texture to the conversations going around and the aromas floating in the air.

Erik McIntyre, a Mott Community College and Flint Institute of Music alum, along with the other three members of his jazz quartet played throughout the evening, making sure to all wear their masks.

Focused almost entirely on their customer’s safety, Burt and Vu created a block schedule that would allow four couples at a time to experience the hour-long feast. This was followed by a 15-minute-long sanitation period where each stand would be cleaned from top to bottom before allowing the next round of couples to enter them.

After a week of construction, planning, and practice on Saturday, May 23, Burt and Vu hosted the city’s first COVID-aware dine-in experience in the FCHC’s parking lot wedged between Martin Luther King and Fourth Avenue.

Polly McCollum, a Flint resident, was one of the guests fortunate enough to experience the invite-only test run. “I really didn’t have any idea what to expect … we’ve [McCollum and her partner] known Charlie for a while. I trusted what he was doing,” McCollum said. 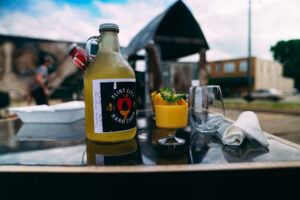 McCollum noted that every aspect of the experience was based around maximizing distance and minimizing physical interactions. According to her, all staff members were masked and food was transferred from the staff’s hands to a table away from the stands and picked up by customers themselves.

Most importantly, McCollum said the night was the perfect balance of great food and great drinks. “The food was so good … they had the papaya salad to start with paired with a margarita inspired cider, so perfect … the mango pudding with Charlie’s mango cider, it was a really good union, they did such a good job,” she said.

That night, McCollum, with 23 other diners, shared an experience that has eluded millions of Michiganders and Americans for over two months. They enjoyed a sit-down dinner at a restaurant while observing and respecting all COVID-19 related health measures.

Though no approval or endorsement from the city was obtained (in fact, the mayor’s office didn’t even know this was happening) Burt and Vu went to great lengths to ensure they covered all their bases.

Vu and his prep chef, both of whom would be handling the night’s meals, were tested that week for COVID-19. They both tested negative.

In addition to ensuring the safe handling of food and drink, Burt reached out to Kady Yellow, director of placemaking for Flint’s Downtown Development Authority and member of Mayor Sheldon Neeley’s Blue Ribbon Committee, which focuses on the best practices to approach the reopening of the city.

He wanted Yellow’s input on what would be the safest way to reintroduce customers to a dine-in experience.

Yellow has grown used to these types of conversations. As Flint’s director of placemaking, she’s become the go-to person for questions regarding the right way to integrate programming like Burt’s into a COVID-safe agenda. 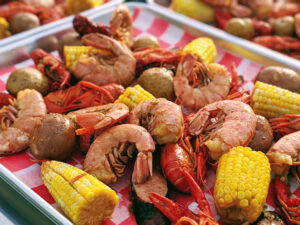 Yellow said she wanted the night to serve as a proof of concept. She wanted to show something like this could be done.

“They were an example for the highest standards of reopening as a restaurant, as a drink establishment that today is comfortable for all. Anyone could have come,” Yellow said.

Along with the night being a success, Yellow stressed the fact the event was not sponsored or sanctioned by the City of Flint. Rather, she used her professional experiences to inform Burt on an individual capacity.

That’s not to say the night was an act of rebellion or defiance. According to Yellow, she had already proposed a similar plan to Neeley. “When you’re talking to the mayor, who just lost two city employees to COVID, those interactions are very sensitive,” Yellow said.

“The mayor knows that I recommended a program just like this, where we’re going to encourage and educate people on operating at the highest safety standards,” Yellow said. Despite this, it was just a group of “artists, musicians thespians and chefs coming together to figure this out.”

Furthermore, Yellow said that for her, that night was an “example of Flint leading.”

“It was an exemplary approach to … approaching dining and take-out in a new way,” she said. “Examples like these are great because then we know they work…the drink, the food, where they sat, the music, everything was thought through and that’s what Flint is going to be now.”

Though dubious at best from a legal standpoint, Burt, Vu, Mason, Yellow and even customers like McCollum along with the restaurants’ staff all made a strong case for the slow and conscious reopening of Flint locales.

“Everyone involved was well aware of the safety precautions taken … what we’re doing isn’t just to make a couple extra bucks, it isn’t to put people at risk. This is to put Flint on a platform and say ‘look at what these people did and look at the precautions they took,’ and understand that what we’re doing is creative and innovative and safe,” said Burt.

In a city that has seen everything from the poisoning of its own people to now, a global pandemic, COVID-aware dinner in the FCHC parking lot proved that Flintstones, while eager to interact with their town, are not willing to do so unless everyone is safe first.

“Our main goal was to provide our customers with a safe dining experience as well as something very unique to Flint … We wanted this to be kind of a pilot and to be innovative and not defiant,” Burt said, adding that he wanted to “show people that downtown Flint is ready to make this change, ready to accommodate our customers and all the people that support the businesses down here.”

Santiago Ochoa is a freelance reporter looking to write about all things Flint. He especially enjoys investigative reporting and human-interest stories. A communications student at UM-Flint, Santiago currently serves as The Michigan Times' (the university's student-run newspaper) Editor-in-Chief. He has worked with publications and organizations like The New York Times and the Interamerican Press Association in the past. You can follow him on Twitter and Instagram at @santi8a98 and can send any tips or comments to santi8arueda98@gmail.com.