Flint NAACP leader under fire after saying homosexuality is an “abomination”

FLINT, MI — A local NAACP leader came under fire after he shared a post on Facebook saying he is not voting for a political candidate because she is “gay.”

AC Dumas, who serves as 1st Vice President of the NAACP of Flint, says his choice not to support democratic candidate Dana Nessel who is vying for Michigan’s Attorney General seat has nothing to do with his role with the civil rights organization but instead supports his religious views.

“I said what I said whether I’m a member of a civil rights organization or not,” said Dumas. “My religious convictions outweigh civil rights and all that…Whatever the NAACP views (are) about sexual preference, I’m not for it. That’s just it. That’s what makes America great. People have the right to chose.”

On Saturday, Oct. 6, 2018, Dumas post “I will not be voting for the Michigan Democratic Candidate for Attorney General because she is gay!” The post also included a link to Nessel’s campaign page dana2018.com.

Nessel’s website says she lives with her wife. She is running against candidates Tom Leonard, Lisa Lane Gloria, Gerald T. Van Sickle, and Chris Graveline during this year’s November 6, 2018 elections.

“I do my due diligence,” Dumas added. “I check each candidate before I make a decision to support them.”

Leaders of the Michigan Pride PAC said the Flint NAACP Chapter should be concerned about Dumas’ personal views regarding the LGBTQ community. 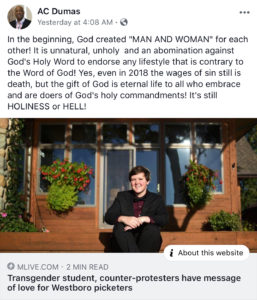 “If I were the president of the NAACP chapter I would be concerned about someone putting this opposition out on a platform,” said Stephanie White who serves as head of the Equality Michigan Pride PAC.

“That’s out of touch with the national NAACP position,” White said. “The national position is one that fights all kinds of discrimination…It’s a shame that he has a bias against (Nessel) and he chose to encourage people with his bias. A strong majority of Michigan voters are against discrimination. He’s kind of an outlier.”

Flint NAACP President Frances Gilcreast said Dumas’ views are not in line with the NAACP, but he has the right to express himself as long as he is not using the NAACP for his platform.

“He does not speak for the NAACP,” Gilcreast said. “We don’t care what you do in your personal life. We don’t care what you do with your own agenda. We don’t play those games. We can’t control what they say personally because that’s their right but you can’t do it under the auspice of the NAACP. Just because he’s a member, it doesn’t give us a right to say anything to him. ”

Dumas did not refer to his position as 1st Vice President of the Flint NAACP chapter in his post which he later removed and replaced with another post saying, “In the beginning, God created “MAN AND WOMAN” for each other! It is unnatural, unholy and an abomination against God’s Holy Word to endorse any lifestyle that is contrary to the Word of God!” 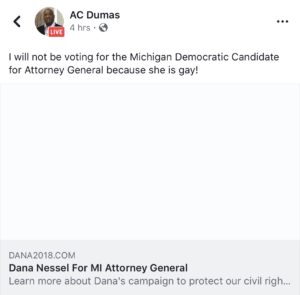 The posts attracted an outpouring of Facebook criticism as LGBTQ supporters responded to Dumas’ stance.

Supporters of the LGBTQ community have threatened to a hold protest during Dumas’ show at the radio station located on Flint’s south side.

“I would invite anyone to have a debate,” Dumas said. “That’s my conviction about homosexuality. It’s an abomination. I think it’s far more different than being an adulterer and any other sin. That’s my stand.”