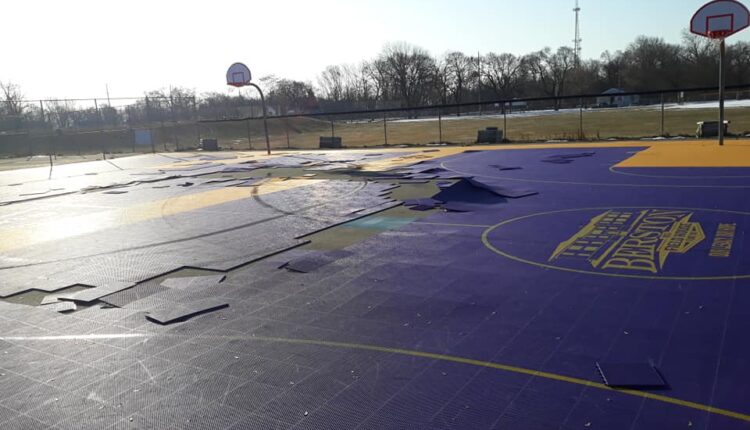 Flint, MI – Officials say, five people, four of whom are Flint residents, turned themselves in today regarding the vandalization of a $40,000 basketball court at Berston Field House.

According to a joint statement from Mayor Sheldon Neeley and Berston’s Executive Director, Bryant Nolden, the five people ranging from ages 17 to 23 will pay full restitution, do community service and take a tour of Flint City Lockup.

The group comprised of both men and women, reportedly damaged the basketball court sometime early morning on Feb. 23. Nolden made a Facebook post of pictures and also shared the damage during Facebook Live video showing tire tracks and other damages to the basketball court. As of Feb. 25, the video had an estimated 66,000 views. Both Neeley and Nolden offered a $1,000 reward leading to the arrest of who had damaged the court.

“Seeing those courts damaged made me angry. It made a lot of people angry. The outpouring of support we saw showed how much love there is for Berston throughout the community,” said Nolden in the Feb. 25 statement from Flint City Hall, who also serves on the Genesee County Commission. “Part of what makes Berston so special is that it has a lot of heart. These young people have bright futures ahead of them, and I could see their sincere remorse.”

The court was installed in October 2019.

City officials say as long as the group makes good on their commitment, they will not press charges.
“They have no criminal past, and this was a lapse of judgement resulting in a property crime. We did not want to see them carry the lifelong burden of a felony record after they voluntarily chose to own up to their mistakes and pay full restitution,” Neeley said.