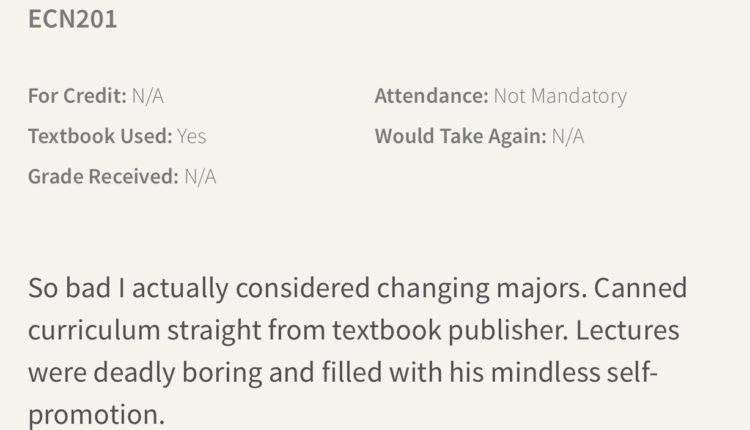 That in itself is not surprising given his history — Perry has filed at least 35 lawsuits against Michigan universities alleging discrimination against males, according to his prideful bragging in The Detroit News. He has a track record of weaponizing lawsuits and media attention to push universities into bending to his will — notably, two years ago, Michigan State University changed the name of a women’s lounge on campus because Perry was aggrieved that men also couldn’t go in there. 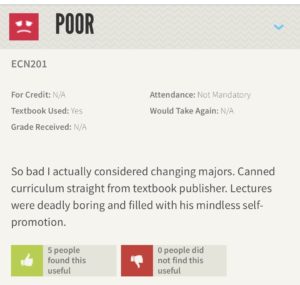 Perry — who makes over $140,000 annually from UM-Flint — has a singular intent: to protect male, particularly white male, privilege in higher education. His viewpoint is so absurdly stupid, that it hardly merits a serious response. So let me start with a non-serious one — pointing and laughing at some of his Rate My Professor reviews:

He is a terrible professor. He lectures for hours from powerpoint slides provided by the textbook company (which he is friends with and mentions several times). He offers only one point of view and references his blog often. His political views are very obvious.

Wastes all his class time by talking about his blog posts.

Website dedicated to his stupid hobbies. In love with himself. Lives in fantasy world. Needs to get in touch with reality. has no sympathy for the common person’s struggle. Hard to do when you are a fat spoiled out-of touch brat.

He is extremely boring and seemed to have some build up frustration. He is practically useless when it comes to answering students questions.

Doesn’t seem to create any of his own curriculum, which should be considered academic fraud at the graduate level. Lectures are deadly boring.

Seriously, he namedrops being friends with a textbook publisher in class? What a hip dude! And I really enjoyed that The Root put him in their “Mayo-American Hall of Fame.”

But that’s immature of me. So here are a few better-formed responses.

iii.     He successfully bullied Michigan State University into changing the name of a small women’s lounge and making it a common space where men are now allowed as well. You know, the same Michigan State University that harbored a serial sexual abuser of women and complicit administrators who protected that criminal for years, not to mention an athletics program that has had its own severe issues with sexual violence against women on campus. Why would they possibly need a safe space for women???

I worked in higher education for eight years, including a significant amount of time at a STEM university. Every major company in America is looking for increased diversity in its workforce. Every major company in America is eager to fund tech-related pre-college opportunities for diverse students. Early exposure to concepts like coding is critical, especially for underrepresented or economically disadvantaged populations who haven’t traditionally had opportunities in STEM education and fields. Black Girls Code is an amazing national organization that every college campus in America would be proud to partner with.

Mark Perry’s contentions, as cited in The Detroit News, that women are actually over-represented on college campuses and, thus, don’t need additional measures like scholarships, specialized camps, and women-only spaces on campus, is infantile. Here are a couple of the more ridiculous passages:

At UM, women dominate in 17 out of 21 fields of study, with business and engineering being the only areas where women are underrepresented.

Hmmm … so business and engineering, the two fields of study that traditionally yield the highest paying jobs to graduates, are the “only” ones dominated by men. Got it.

“Gender discrimination has been embedded, accepted, embraced and institutionalized in higher education for decades,” Perry says.

Just want to throw this statistic out there: despite women composing the majority of students on college campuses, nearly 20 percent of women are sexually assaulted during the time they are in college. And that number is likely much higher considering the number of sexual assaults that go unreported. Oh, and female administrators are still paid less than male counterparts (Inside Higher Ed). White men hold 55 percent of full-time professor jobs nationally, according to the National Center for Education Statistics. And male faculty members are not only more likely to assign works by male authors than female authors, they also hilariously and sadly assign nearly three times more of their own published work than female faculty. Which fits with one of the Rate My Professor descriptions above of Professor Read My Blog Posts Damnit.

So no, Mark Perry, discrimination against white men has not been an “embedded, institutionalized” issue in higher ed. Higher ed mirrors the rest of society, where it has been substantially easier for mediocre white men to advance than anyone.

Sadly, based on my anecdotal experience in universities, Mark Perrys aren’t uncommon, he just happens to be more media savvy than others I’ve encountered. I’ve witnessed tenured male faculty dominate or actively belittle or resort to passive aggressive tactics to derail meetings or silence voices of female colleagues. I’ve heard horror stories from female colleagues about the behavior of men on tenure committees who made the process exceedingly difficult for them. I’ve seen men openly scoff at being open to or showing empathy to the experiences of marginalized or underrepresented groups of students. Not all of the male colleagues I’ve worked with have done these things, but an emboldened and vocal enough minority of them certainly wield enough power to make things hell for those with good intentions.

Patrick Hayes is a freelance writer with bylines for ESPN.com, the Detroit Free Press, Next City, Sierra Magazine, Lifehacker, MLive, and others. He also contributed an essay to "Happy Anyway: A Flint Anthology" by Belt Publishing. Follow him on Twitter (@patrick_hayes) and Instagram (@patrickhayes13) and see his work at www.patrickhayes.net. He and his two children live on Flint’s eastside.