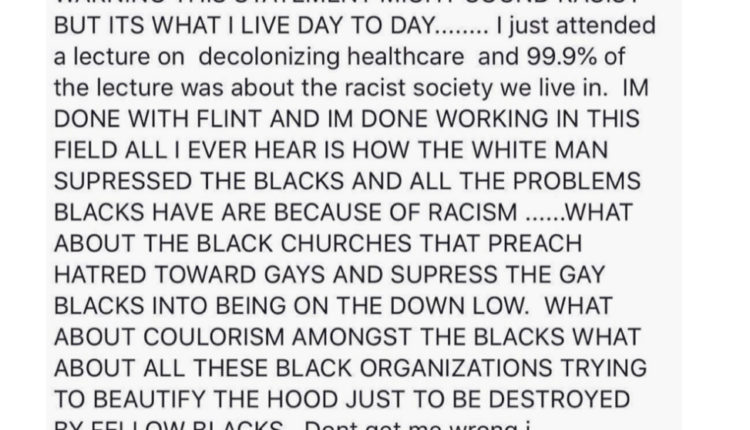 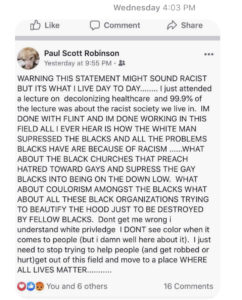 On Tuesday, July 17th, Wellness Services INC hosted a dinner and lecture on the topic of Decolonizing Health Care. Our agency invited community partners to participate in this all-important conversation, and were fortunate to be joined by representatives from multiple agencies who’ve dedicated themselves to bettering the lives of people across the various communities they serve.

The participants were provided dinner while our Director of Programing, Teresa Springer, delivered a powerful message about the various ways in which the history of white supremacy has and continues to produce disproportionately disastrous outcomes in the lives of Black and Brown people—and women in particular.  While several of our guests thanked Ms. Springer profusely for her research and delivery—stating that they were deeply moved, there was at least one guest who apparently took issue with what Ms. Springer had to say.

Rather than ask questions, voice concerns, or offer an alternate view of the content, Mr. Paul Robinson of Sacred Heart, took to his Facebook page to air his grievances with the general public.

While the content of Mr. Robinson’s post was unequivocally problematic, it also highlights a litany of the very issues that many white Americans are currently, and often publicly grappling with, ignoring, or outright denouncing as left-wing propaganda.  His post gives someone like myself, an opportunity to address these pervasive issues head-on, and for that, I suppose, I am grateful.

He notes going to the dinner/lecture on “Decolonizing Healthcare,” and that “99.9%…was about the racist society we live in.” Indeed, it was. So far, so good.

However, things take an ominous turn as grammar is eschewed and an all-caps, comma-free, run-on paragraph ensues…

Mr. Robinson seems genuinely surprised that “Decolonizing Healthcare” focuses so heavily on white supremacy.  Even for the woefully ahistorical, I assumed colonization was widely understood to be a largely “Western” imposed phenomenon driven by capitalism and justified by white supremacy.

Apparently, Ms. Springer’s lecture was one lecture too many.  Mr. Robinson states he is “DONE WITH FLINT” and “DONE WORKING IN THE FIELD” because all he ever hears is “HOW THE WHITE MAN SUPPRESSED THE BLACKS AND ALL THE PROBLEMS BLACKS HAVE ARE BECAUSE OF RACISM.”

To that point, Ms. Springer was not presenting on how Black and Brown are done with the health care system. Trust me when I say, Black and Brown folks WISH we could be done with the institutions that disproportionately harm so many of us—from criminal justice, to mass media, to healthcare, to housing, to education.

But where would we go?

When confronted with the realities of white supremacy, Mr. Robinson does what cognitive dissonance demands so many to do in such situations; he pivots toward a laundry list of “what about’s.”  I took the liberty to quote each of his “questions” and pair them to a quote offering a brief explanation for the social phenomenon he points to…

“WHAT ABOUT THE BLACK CHURCHES THAT PREACH HATRED TOWARD GAYS AND SUPPRESS THE GAY BLACKS INTO BEING ON THE DOWN LOW.”

*Ms. Springer, and other participants (including myself), referenced multiple instances in which a combination of internalized racism and classism work to keep Black communities in-fighting.  In fact, we stated throughout the conversation that the next topic is titled: Stigma-ta: White Supremacy, Homophobia, Transphobia, and the Black Church—a conversation detailing the very in-fighting Mr. Robinson referred to.

But in the meantime:

Patricia Hill-Collins argues that contemporary gender / [sexual] discrimination is partially an internal response to years of racial oppression (107).  She notes that in this historical context, many Black Churches “preached a politics of respectability, especially regarding marriage and sexuality because they recognized how claims of Black promiscuity and immorality fueled racism” (108).

“WHAT ABOUT THE COULORISM (read: colorism) AMONGST THE BLACKS”

“…it was they [Europeans] who created the image of Africa that was projected abroad. And they projected Africa and the people of Africa in a negative image, a hateful image.

Those who oppress know that you can’t make a person hate the root without making them hate the tree. You can’t hate your own and not end up hating yourself. And since we all originated in Africa, you can’t make us hate Africa without making us hate ourselves. And they did this very skillfully. And what was the result?

“WHAT ABOUT ALL THESE BLACK ORGANIZATIONS TRYING TO BEAUTIFY THE HOOD JUST TO BE DESTROYED BY FELLOW BLACKS.”

“It would have been better to have left the plate glass as it had been and the goods lying in the stores.  It would have been better, but” (and here is the key thing) “it would also have been intolerable, for Harlem had needed something to smash. To smash something is the ghetto’s chronic need. Most of the time it is members of the ghetto who smash each other, and themselves. But as long as the ghetto walls are standing there will always come a moment when these outlets do not work.” – James Baldwin

Mr. Robinson then reassures us that he indeed “understands white privledge” (read privilege), by noting his apparent Homo sapien-specific, retinal restriction that doesn’t allow him to “see color when it comes to people.”  While we are truly sorry for his human-specific condition, we would be remiss not to note that understanding white privilege starts with recognizing the role color plays in our society.  Being unable (read unwilling) to see color, would thus greatly interfere with ones ability to “understand” it. We therefore wish Mr. Robinson the speediest of recoveries.

Mr. Robinson closes by supposing this oft-recited line from any of us who’ve ever wrestled with a savior complex: “I just need to stop trying to help people (and get robbed or hurt) get out of this field and move to a place WHERE ALL LIVES MATTER………”

Perhaps you should Mr. Robinson.

For the artist, activist, and academic, Lila Watson said it far better than I could: “If you have come here to help me, you are wasting your time. But if you have come because your liberation is bound up with mine, then let us work together.”

We ALL risk a lot every time we step into this work.  The only risk Mr. Robinson takes that differs from the rest of us, is the risk that he might be served a free meal and made to sit uncomfortably through a lecture about white supremacy, while so many others in the room (of various races-including white) seem right at home in the conversation.

If Mr. Robinson, and others of his persuasion, truly felt that ALL lives mattered, they would be outraged that so many innocent people who seek health care are dying. Such a philosophy would demand it. They would inherently understand that sitting through a steak dinner for an hour is indeed a privilege—particularly compared to someone losing their life at the hands of the very institutions designed to save them.  They would read their own discomfort as a red flag—an emotion antithetical to their philosophy.  They would lean in, ask questions, name their anger and frustration, and work through it—precisely because so any lives are at stake, and all of them matter.

One of my mentors say’s that there’s a time and place for everything.  There are times for recognizing the whole and times for examining the parts.  One does not compete with the other.  For instance, most of us would never consider running into a funeral, insisting that the ceremony focuses too much on one person and thus invalidates the lives of everyone else.  Nor would we, in our discomfort at their recognition, shame the recently deceased. “Well, grandma wouldn’t stop smoking Camels and eating bacon—even on Sabbath! We’re Jewish, for himl’s sake!  What about that affair she had with Saul!?!  And that tattoo on her forearm?  She deserves whatever comes next!”

One could consider the topic of “Decolonizing Healthcare” a mass-funeral, wherein countless Black and Brown bodies are dying. One could consider treating the topic with the same respect for the deceased you would in any other instance. However, this rarely happens within the “all lives matter” community because, “ALL lives” is a pivot—a way to say, “your conversation about white supremacy makes me uncomfortable. I feel attacked, and even though I’m very safe and alive, and you are dying, I’d prefer you to be silent on these issues.

Mr Robinson, and his supporters, took time out of their busy lives  to use their voice to trample, and trudge over and through an ever-growing labyrinth of Black and Brown bodies. A winding, labyrinth of pastel-colored gowns, bloated, seeping, nameless, corpses piled high like cordwood. Bodies disproportionately created by yet another institution sworn to save our lives.

The Mr. Robinson’s of the world will never attempt to halt the labyrinth’s growth.  They will instead continue to climb over and around—scramble and squirm through the bodies.  They will pretend not to see them even as the ever-dripping pools of blood begin to impair their vision. They will not say their names—even though doing so would be their salvation.  They will close their eyes, pinch their nose and desensitize themselves to the carnage as much as possible—continuously crushing craniums underfoot, crying in their discomfort and contradictory conviction that “all lives matter.”

Mr. Robinson, I say this with all sincerity…

You need a training.