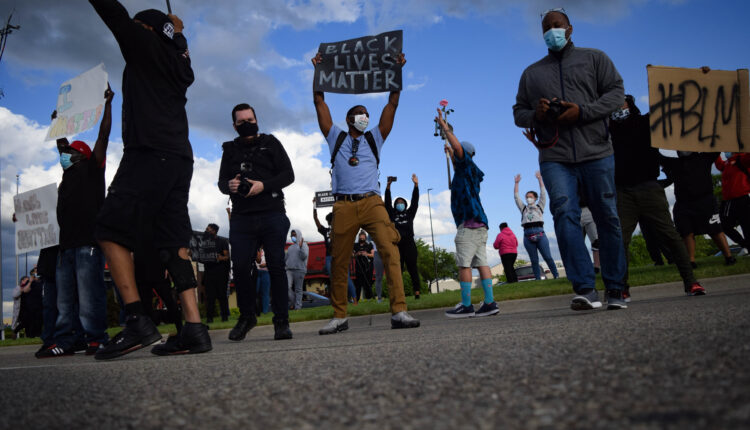 Flint Township, MI—A little after 9 p.m. protesters reached the Flint Township Police Department offices on Norko and Fleckenstein. They were met with about a dozen police officers wearing body armor and wielding batons. The scene, at first, was tense.

The protesters had marched there, as so many other protesters around the country were marching, because of the death of George Floyd, a black man who was killed by a police officer in Minnesota.

Protesters at the front of the line quickly approached the officers, pleading with them to put down their weapons.

Marshall Green, a wheelchair-bound Flint local had made his way to the front of the protest, chastizing the line of officers saying “We want you all to do what you’re supposed to do and take care of the city and stop killing us. You are the main ones hiding behind those goddamn masks and riding around killing folks.”

As the yelling, honking and revving reached its peak, Gabriel White, a Flint native who had led the majority of the three-mile march down Miller Road’s commercial district, to the police station, stretched his arms up the sky.

He called for all protesters to sit down. Mere feet away from the police line, he was the first to do so.

A majority of protesters joined him before getting back up a few minutes later. The mood in the crowd had shifted.

As everyone stood back up, Green, who had observed White’s call by going silent, gently wheeled his way to two police officers. He grabbed their forearms and asked if he could sit in line with them.

Green backed into the space between the officers, lifted his arms up, much like White had and locked arms with them.

At the same time, other protesters and officers had begun bumping fists and hugging. Officers in the line embraced protesters and told them they would not let something like what happened to Floyd happen in Flint Township. They expressed regret and lament for Floyd’s death.

Several officers then removed their helmets and put down their batons as Genesee County Sheriff Chris Swanson did the same.

The country awoke today met with scenes of shattered glass, smoldering cars, and streaks of graffiti in some of the U.S.’s largest cities. But after a night full of protests across the nation that will likely be referenced in history books, Flint entered the ranks of cities that remained nonviolent and joined a league of its own when protesters marched side-by-side with police.

Swanson called for the protesters attention and said, “ I’m going to tell you, we want to be with you all for real. I took the helmet off and laid the batons down. I want to make this a parade, not a protest.”

The crowd started chanting “Walk with us,” to which Swanson replied with a gesture motioning for everyone to follow him.

The protesters, along with Swanson and a handful of officers, then began walking back toward the Miller Road Target parking lot.

The protest started around 6 p.m. outside the Miller Road Target. A group of about ten people clustered together held up signs reading “Black Lives Matter,” “Stop killing black people,” and “No justice, no peace.”

White walked ahead of everyone for the majority of the march. When asked why he walked apart, White said, “I’m not alone … I’ve got all my people behind me, but sometimes you’ve got to lead from the front.”

Before the hour ended, the number of protesters had reached the hundreds, spilling into the road and blocking off almost all of Miller. The crowd, tailed by a quarter-mile-long line of supporters in cars, made its way down to the Miller Road I-75 southbound on/off-ramp. It remained there for a few minutes, blocking off the highway exit and entrance before making its way to its final destination, the Flint Township Police Department.

During the walk, protesters chanted, “Say his name, George Floyd,” and “I can’t breathe.”

Arreon Echols, a 27-year-old from Flint, led many of the chants to the point of losing her voice.

“I’m here because I don’t believe in police brutality,” Echols said. “What they did to George Floyd is not right. I want to stand up, I want change. There won’t be peace until we get justice.”

Echols went on to say she wanted all four officers involved with Floyd’s death to go to prison. As of press time, only Derek Chauvin, the ex-Minneapolis police office who knelt on Floyd’s neck until his death, has been charged with third-degree murder and second-degree manslaughter.

“I want George Floyd’s family to get justice,” Echols said.

White said he has seen in other protests how those leading were often either instigators or the first to be injured. He didn’t want anyone else to be in harm’s way. Most importantly, he said, he wanted to keep the police accountable.

“When they (police) break the law, you have the right to take action,” White said. “They have a power that you respect, but when they cross the line, they don’t have that power anymore. The power becomes part of the citizens and we have to police the police if they’re not going to do us right.”

A local healthcare worker who wished to not be named was handing out new surgical masks to protesters who needed them.

“Systemic racism is a very, very real thing, it needs to come to an end. I’m tired of seeing the violence and these young kids, innocent people getting killed. We have to make our voices heard,” they said. As for the masks, the worker said, “People need them, and I have some on hand,” they said. “I just thought I’d bring them up here today. It’s tough during a pandemic to do something like this, so I thought I’d help.”

Swanson told Flint Beat what made him put his gear down. “I saw the first hug from officer Chad Miller … and that broke the ice. And I thought when people embraced him, we need to do the same thing.”

The sheriff went on to say, “We don’t need to stand there if there is no violence … do you think the police department wants to be attacked? No way. We’re with the community.”

Some protesters like Mackenzie Meyers, a lifelong Flint resident, felt dissatisfied with Swanson’s actions, saying the sheriff, who is up for re-election in November, was more than anything pulling a publicity stunt and taking advantage of the situation.

“I believe that when he started talking on camera, things started to change. After he heard me say I believe that he should be leading us as a group instead of an individual … that’s when he decided to make his move.” Meyers said. “He should have have been leading us from the start. He knows what people want, and he knows people want to be protected.”

When asked about whether or not Swanson had considered the optics of his actions, he said, “That’s from the heart, when you see people do what they did, that’s unprecedented. You don’t see people who appreciate truth … We didn’t plan any of this. We’re just acting on truth.”

Soon after, the police officers and protesters reached the end of the protest. In the Target parking lot, Swanson, as well as other protest organizers, stood before the crowd and spoke about the importance of what had happened that night.

As the night came to a close, protesters and officers alike spent time in the parking lot playing music from their cars and talking.

Santiago Ochoa is a freelance reporter looking to write about all things Flint. He especially enjoys investigative reporting and human-interest stories. A communications student at UM-Flint, Santiago currently serves as The Michigan Times' (the university's student-run newspaper) Editor-in-Chief. He has worked with publications and organizations like The New York Times and the Interamerican Press Association in the past. You can follow him on Twitter and Instagram at @santi8a98 and can send any tips or comments to santi8arueda98@gmail.com.