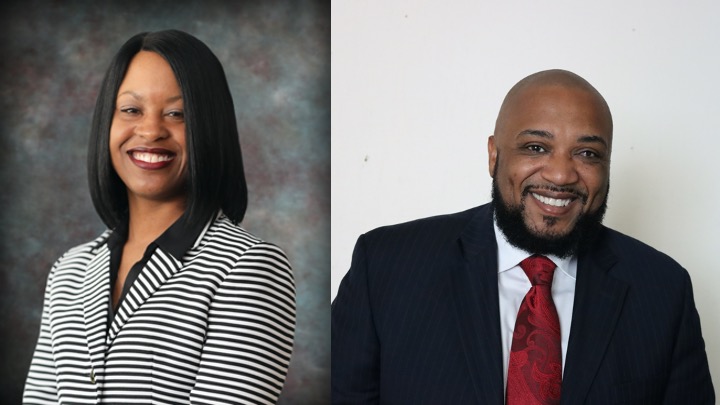 Both Steward and Jones said they share a unique commitment to Flint Schools due to their roots in the city.

Steward said she and Jones attended Flint schools during an era when Flint was a “model district.” They both have a “drive” to see that happen again, she said.

Due to COVID-19, Steward said ensuring students and staff return safely is the first priority when virtual instruction begins on August 5th. Once those pieces are in place, they will revisit the district’s strategic plan, which has not been revised in years, she said.

“We want to map out the next five years…That strategic plan is vital. It, one, holds us accountable, and then, two, you have many stakeholders involved in creating the plan,” Steward said.

Involving parents, staff and other community members in developing FCS’ new strategic plan is key to turning the district around, she said.

“Oftentimes we lay out a course and we end up getting off track. If we said that ‘we’re doing this,’ we need to do this…[We want] our stakeholders to hold both the assistant superintendent and I accountable to what it is we said we were going to do with our five-year plan.”

Steward selected Jones as her counterpart because he complements her strengths and weaknesses, which is necessary to put strategic work in action, Steward said. “Mr. Jones, he’s a big picture guy and I am the detail person.”

Jones to Focus on Bolstering the District’s Climate and Culture

Jones calls his students “scholars” and asks them to refer to themselves that way, too. It’s a simple change in nouns but it reflects the high-achieving and distinguished culture he said he hopes to create in FCS in his new role.

Jones attended Great Lakes University where he studied music and performing arts. “I’m a musician for over 30 years. I’ve been recording music, mostly gospel music.” He then went back to school for his master’s in education leadership at Madonna University.

He began his teaching career as an assistant teacher at Linden Charter Academy and worked his way up to becoming dean of middle school where he served in the assistant principal capacity. He also served as principal of Momentum Academy in Hazel Park. Under his leadership, students’ English language arts proficiency scores rose from 10% to 34% in 2017, according to The Detroit Free Press.

For the last three years, Jones has worked to “rejuvenate” the culture at Doyle-Ryder Elementary. “Turning around the climate and the culture in Doyle-Ryder is one of the reasons why I decided I wanted to become assistant superintendent, to continue to assist with the culture and climate of our district.”

When he started at Doyle-Ryder, the first thing he did was sit down with staff to determine the school’s strengths and weaknesses, he said. “[Staff] didn’t feel togetherness, they didn’t feel that they were heard, they did not feel that the academic program as it pertained to the building was cohesive.” There was also no plan in place for students who were falling behind, he said.

With the help of a leadership team, Jones and fellow staff members developed a plan to address those issues. “We always gave [staff] an opportunity to survey,” he said, adding that new actions were taken to allow all stakeholders, including students and parents, to have a voice. “We got consistent and we made sure that we were communicating.”

Steward’s passion is teaching but her “heart” is curriculum and instruction, she said.

She received a master’s degree in teaching from Marygrove College in Detroit and a second master’s in K-12 administration from Eastern Michigan University. She has served at FCS in various roles for 22 years.

In her position as assistant superintendent, she created instructional materials that informed the district’s curriculum. “That’s what I love to do. I love to be able to look at it, to analyze it, to help people figure out how to implement it into their classroom,” she said.

Her curriculum experience will play a significant role in developing and delivering the district’s five-year plan, she said.

There is a lot of work ahead, Steward said, and FCS cannot do it alone. “We need our partners.”

Both Jones and Steward said they look forward to beginning the school year, but Jones said he wanted to make one thing clear: “Flint is back!”