Lansing, MI—Gov. Gretchen Whitmer signed an executive order Thursday extending Michigan’s stay-at-home order to May 28 but allowing manufacturing workers – including those at Michigan’s auto companies – to resume work on May 11.

Manufacturing facilities will be required to adopt new measures to protect workers from the spread of COVID-19, including a daily questionnaire and temperature screening for everyone entering the facility.

But Whitmer said extending the stay-at-home order is necessary to prevent a second wave of cases.

“It’s terribly important that we not let our guard down now, that we consider this a very real threat,” Whitmer said. “COVID-19 is still present and can grow if we don’t continue to be vigilant, if we let our guard down.”

“The worst thing we can do is open up in a way that causes a second wave of infections and death, puts health care workers at further risk, and wipes out all the progress we’ve made,” Whitmer added.

Whitmer announced there are six phases to her MI Safe Start plan to reopen Michigan’s economy, and the state has already made it through the first two. 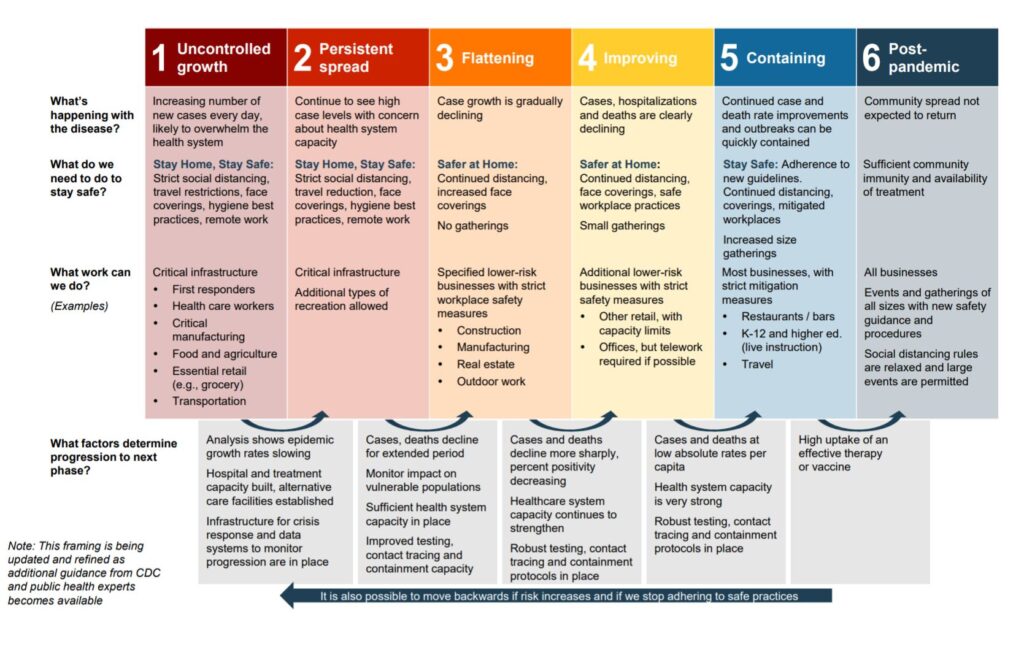 Gov. Gretchen Whitmer’s MI Safe Start plan.Phase one is uncontrolled growth, where there is an increasing number of new cases every day, on track to overwhelm health care systems.

Phase two is persistent spread, where the state continues to see high case levels and there is concern about health system capacity.

The third phase, which the state is currently in, is flattening, when the epidemic is no longer increasing and the health system’s capacity is sufficient for current needs. Whitmer previously allowed real estate and construction workers to return to work during this phase.

Phase four is improving, where cases, hospitalizations and deaths are all declining more sharply and there is robust testing and contact tracing. Non-essential retail will be allowed to reopen with capacity limits in place during this phase and small gatherings will be allowed to resume as long as social distancing is followed.

The fifth phase is containing, when there is continued case and death rate improvements, with outbreaks being quickly contained. Restaurant dining rooms, bars, K-12 schools and institutions of higher education will be allowed to reopen during this phase.

Phase six is post-pandemic, which is when community spread is not expected to return – likely only when there is a vaccine available. Large gatherings will not be permitted to resume and social distancing will not be allowed to end until this phase is reached.

Dr. Joneigh Khaldun, the state’s chief medical executive, has previously warned that it could take more than a year before the state enters the final phase.

“We have to keep in mind that it may take as long as 18 months for a vaccine to be developed for COVID-19 and we still don’t have the antiviral treatments for this disease,” Khaldun said. “So, life in the foreseeable future will not go back exactly to what it was before COVID-19. This is truly going to be a marathon and not a sprint.”

“We’re still in the early months of fighting this virus in the state,” Khaldun added. “We can beat this disease, but it will really be a long-term effort that will last into next year.”

It is possible to move backwards to earlier phases if cases begin increasing again.

Of the confirmed cases, 1,731 are in Genesee County, and 213 people in the county have died from the virus.

Flint Students to Receive Central Air Conditioning; Northwestern to Operate as a…