Flint, MI–Last year, more than one hundred murals went up on the walls and buildings of Flint.

Sunday, the city got one more–on the street.

About 55 volunteers and 10 professional artists took to the street armed with face masks and paint rollers to contribute to the mural and show their support for the Black Lives Matter movement.

The mural stretches about 250 feet from the street outside of the Flint City Hard Cider parking lot to the corner of Fourth Avenue. 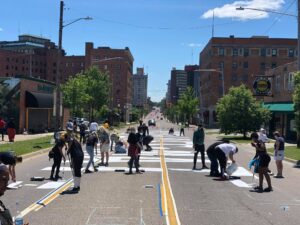 Kady Yellow, the city’s director of placemaking, says the creators of the project got the “blessings” and support of the businesses along the street to put the mural in this space.

She said it was an ideal spot because there are no road signals that would be covered by the mural, and because the movement’s message is on a street named after Dr. Martin Luther King Jr.

According to Yellow, the mural should last five to ten years because of the quality of the paint used.

Similar street murals have gone up in cities all over the country including Brooklyn, Seattle and San Francisco in light of recent protests regarding police brutality and racism.

Mayor Sheldon Neeley expressed his full support for the mural in a press release from the city Sunday night.

“This community stands united with Black Lives Matter. I am so proud to see so many come together to support justice and equity. Unity is strength. Together we can, and we will, move our community and our nation forward,” Neeley said.

The mural was created in collaboration with the Flint Public Art Project, The What’s Up Downtown Project, and the Flint Downtown Development Authority.

The Community Foundation of Greater Flint funded the mural with a $3,700 grant.