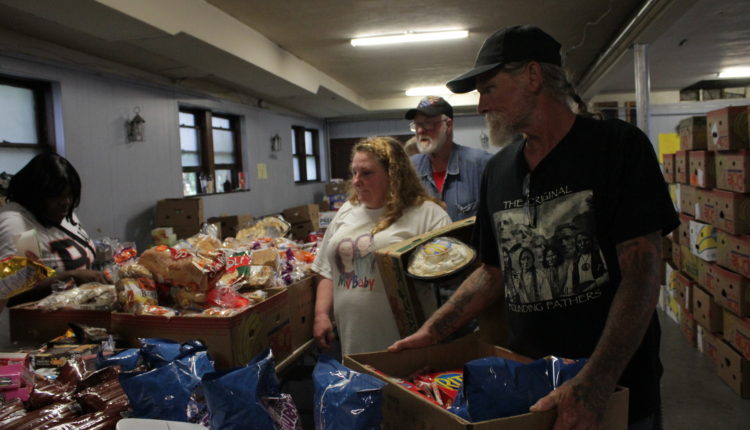 Though this trend repeats itself in food desert cities across the country, the four-year anniversary of Flint’s water crisis adds a nuance. A food desert combined with a city-wide water crisis has exposed an estimated 100,000 people to lead-tainted water. This underscores the necessity of accessible fresh produce to counter the effects of lead poisoning.

“It’s real bad because they closed all the grocery stores around here. I used to shop at Krogers all the time, so I don’t have no car, so it’s kind of hard for me to get to the stores and stuff like that because they are so far away.” – Flint resident, Tawana Davis

Access to fresh produce is cited as a preventative measure against the effects of lead intake resulting in high blood levels, especially in children. In 2015, it was discovered that Flint children had elevated blood lead levels after the state switched Flint’s water source from Detroit to the Flint River in 2014. That same year, the city began losing grocery stores starting with the close of the Pierson Road Kroger. In 2015, the Davison Road Kroger closed, followed by the close of the Meijer on Pierson Road leaving some Flint residents with little options.

“It’s real bad because they closed all the grocery stores around here,” said Tawana Davis, a volunteer at Greater Flint Outreach Center and Church and mother of four boys. “I used to shop at Krogers all the time, so I don’t have no car, so it’s kind of hard for me to get to the stores and stuff like that because they are so far away.”

It’s a rainy Wednesday afternoon at Greater Flint Outreach Center and Church on Stevenson Street, and umbrellas spread wide along the sidewalk. Mothers stand with restless children and the elderly shuffle expectantly with walkers and canes. Dorian Swift’s number is 77, meaning he has 76 people in front of him waiting to enter the church to fill their containers with donated food items. Once inside he might find loaves of bread, canned goods, chips, sweets, a few bags of potatoes and oranges, though there’s no guarantee once those in front of him have had their pick.

“We be in this line every week and they already know the routine. They pass the numbers out and then they move out of the way so we can get our numbers. Their line get so long and we are still waiting on a number. We need more food places, especially downtown around this area,” said Dorian Swift, 56, as he waits in line at a local church food pantry.

People young and old stand with boxes, bins, carts, suitcases, and children in hand sometimes waiting up to two hours or more for food. Greater Flint Outreach Center and Church services an average of 3,000 people per month.

Just a few blocks away, Prince of Peace Church held their weekly food drive. They offer a weeks-worth of prepackaged bags of beans, vegetables, bread, and milk, but the head organizer of the Prince of Peace food giveaway, Jimmie Thompson, age 60, sees the gap in provisions.

“I would like to have some fresh fruit more often than what I have but they don’t send that much fresh fruit. Because there really ain’t no grocery stores around here to get that stuff,” said Thompson.

Much of the donated food comes from the Food Bank of Eastern Michigan, but Thompson said he feels that another grocery store would help their food giveaways and service the community.

“We got retirement homes around here and we even got college kids around here. A big grocery store could save them traveling time to go out and make groceries. They really do need a grocery store there. I don’t even know why [grocery store chains are] leaving,” said Thompson. “We had some here in the neighborhood, but I don’t know why they all decided to just jump up and leave.”

In 2016, the Flint & Genesee Chamber of Commerce in partnership with the state of Michigan, contracted with Streetsense, a third party architectural design and strategy firm based in Maryland, to conduct a market study on the feasibility of a new grocery store to pinpoint access to nutritional foods in North Flint.

Their study determined that West Pierson Road would have offered the best location in terms of visibility and market sales. Illustrated drafts of a proposed store show a birds-eye view of a grocery store with a combined clinic, aquaponics center, and a neighboring multifamily residential facility. The grocery store, clinic, and aquaponics center would have spanned an approximate 59,500 square feet in total.
The total development costs in establishing a national grocery store would have been a potential $14.1 million compared to the projected $8.1 million needed to build a regional store. Streetsense also estimated a national store would have created a total of 168 permanent jobs, 94 more than what would have been offered by a regional store.

“The original intent was to utilize the connections of the contractor to create a case for bringing in a large big box company grocery store to resolve the lack of access,” said Group Vice President of the Flint & Genesee Chamber of Commerce, Kristina Johnston. “And what they determined was that it was actually not the best route to go for our community and that we needed to focus on the stores that had already invested for many years—through many generations, in some cases—in providing food and grocery store services to the public instead of bringing in a new larger group that would possibly put them out of business.”

With this new approach, the Chamber moved forward with an auditing process that allowed for $590,000 to go towards Streetsense’s recommended improvements for pre-existing stores in North Flint. From store expansion, better internal lighting, product reorganization, parking lot construction to new signage, carts, and ceiling tiles, viable stores that complied, received the money for renovations.
Hutchinson’s, Mr. B’s Foodland, Landmark Food and Drug, and Local Grocer were the initial applicants, but only three of the four were able to follow the grant conditions—conditions that will come to an end this summer.

Despite the difference in strategy, Sanders said he feels that he and the Chamber have the same vision for North Flint.

“Our initiative is one in the same with the Chamber, to actually place a grocery store in the North end of Flint. We are still currently doing some fundraising. It’s been a long [and] tedious process to secure those dollars. The ultimate goal, of course, is to build a 20,000 square foot grocery in the north end.”
Sanders said he began responding to community calls in 2014 for a grocery store for North Flint, two years before the Chamber’s market study was done.

“It took several years just to get people to see that there was a need. And then of course the Chamber came to do the market study to support it and give some legs to it, and we’ve been on this journey ever since,” said Sanders.

Sanders recalls after the market study was done, more support and conversation was garnered for the grocery store initiative. The Chamber allotted both Sanders and Flynn $40,000 to complete their own feasibility studies and architectural mock-ups. Sanders said he considered it a “good start.” Since then he has forged support from Tide Foundation and Michigan Good Food Fund.

The only obstacles he says that are standing in his way are a few missing parcels of land that he hopes to procure before his big announcement this coming fall, but he is hesitant to name specifics like dates and location. Sanders is not the only one facing challenges in opening a grocery store in North Flint. Flint Beat could not reach Flynn for comment.

There has been long-held anticipation for Hamady Complete Food Center to open in the old Kroger location at 2629 West Pierson Rd. Reports of the store’s development began winter of 2016. A six to eight-month plan grew into a nearly two-year-long project.

“With the grace of God, and everything falling in place with the city, the store should open July 18,” said Hamady Complete Food Center owner, Jim McColgan in an interview July 3, 2018. The store has had a number of proposed grand opening dates, but they were postponed due to setbacks including an absence of construction permits, city inspections and lack of employees. In July alone, Hamady officials have rescheduled their grand opening at least twice.

McColgan says the store is in its concluding stages of stocking shelves, license approvals, and city inspections.

He told Flint to ‘relax.’ Now, Michigan is paying him to lead media training