FLINT, MI – Jorain Hardman needed a new start. She had overcome a number of obstacles including a drug addiction and was ready to get her life on track.

“I was in a…homeless program,” said Hardman, now a resident at Swayze Court Apartments. “I literally lived 100 feet down the street from the building here. I thought it was for college students.”

Hardman is one of a number of residents who no 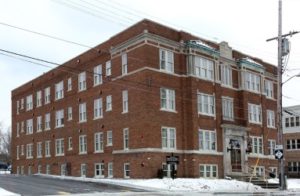 w have affordable living and a better quality of life thanks to an $8.3-million project by Flint-based Communities First, Inc. to rehab Swayze Court Apartments, as told to Flintside.com.

Through Communities First’s efforts residents at Swayze Court have a number of amenities including a computer lab, job and education resources and access to various community programs.

“It’s more than an apartment building,” said Hardman. “It’s an opportunity for me to better myself to become productive in the community. I didn’t know all this was going on behind these doors. We need more stuff like this…We really do. This is more than just a home.”

Since she became a resident at Swayze Court Hardman has completed a nutrition program, is working on a gardening program certification to be part of an effort to bring fresh produce to residents and is now studying for her GED.

“We look forward to seeing tenants grow and accomplish their deferred dreams,” said Glenn Wilson, President and CEO of Communities First, Inc. “Sometimes life doesn’t work out as we hope and this project offers people a chance to get their lives back on track while making positive contributions to society. We understand that things are available but we put in the effort to make things accessible. Equity is at the heart of our organization.”

The husband and wife team launched Communities First in 2010. Since then, they have completed two multi-million projects including Swayze Court for an under served community in Flint. In 2014 Communities First rehabbed Oak School into a 24-unit low-income senior housing facility. It opened September 2015.

“Projects like this creates construction jobs for those that have employment barriers and housing opportunities for individuals that are considered out most vulnerable,” Wilson said. “The resources we provide and the sense of community makes Swayze Court a home for those we serve.”

Swazye Court has been a part of the Flint community since 1924 and was once home to a number General Motors executives and other Flint professionals.

During the last 15 years the building had deteriorated due to neglect, abandonment and vandalism leaving an empty eyesore in Flint’s Grand Traverse District Neighborhood.

“Swayze Court Apartments meets a very real need for quality, affordable housing in Flint,” said Wilson. “Residents have begun to move in and they are enjoying their new home. They come from a variety of backgrounds (and) are forming a community that is supportive and positive, which is amazing.”

The Wilsons introduced the project to the community during a March 31, 2017 ribbon cutting ceremony where guest toured the newly rehabbed Swazye Court Apartments.

“To think about where it started when Glenn and Essence first took me through here. I tell you it took a lot of courage to take on a project like that and yet they believed in it…but what I love about is what’s happening inside the buildings,” said Michigan Lt. Governor Brian Calley, who was one of about 60 guests who came to the ceremony. “You got people who didn’t have a home before that now have a home. It’s a place to live, and it’s a great place to live but it’s also connecting people to the things that they need to make the best possible future.”

For more information on Communities First Inc. visit their website by clicking here.