Flint, MI – As educators across the nation look at ways to fill gaps after school closures during the COVID-10 pandemic, Shekinah Lee took it a step further.

What started as a conversation with her business consultant for her company No 2 Stripes Alike, lead to a Facebook curriculum for young people interested in learning about animals. 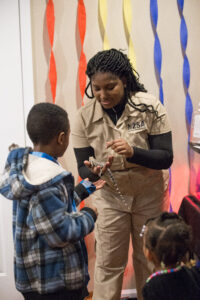 “I had been thinking about what I could do for the kids at home now because school is out,” said Lee, a 33-year-old second-grade teacher. “I was already putting a curriculum together for my students into their virtual learning sites. So, I decided to create one for Facebook too.” She created a curriculum for Facebook through No 2 Stipes Alike, which is Lee’s traveling educational program focused on teaching people about animals.

Lee holds a bachelor’s degree in zoology with a minor in zoo and aquarium science from Michigan State University. She initially worked in zoos but later returned home to the Flint-area and began teaching in a classroom. She also runs No 2 Stipes Alike, where she travels to various locations, including events and at schools, to educate people about animals.

“Before coming home, I did all that stuff you see on National Geographic,” Lee said. Tracking animals, working in zoos. I didn’t think I would like teaching as much as I do. I love it.”

The Facebook Live classes will run on Mondays, Wednesdays, and Fridays from 11 to 11:30 p.m. for a two-week session. The session cost $12 per family.

“It will be fun for everybody,” Lee said. “Everybody will be able to participate in this. We are just going to learn and talk about animals.” Lee added that young people grades kindergarten through third might need help when asking questions during the live stream.

For more information or to participate in No 2 Stripes Alike’s Facebook classroom, visit their page by clicking the link here: https://www.facebook.com/groups/612988975918986/.

Facebook Live classes are Mondays, Wednesdays, and Fridays from 11 to 11:30 starting March 30 through April 10, 2020. Videos will be available after the live event.