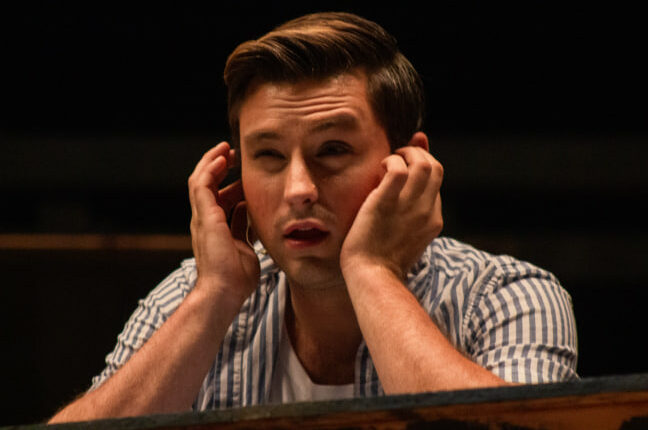 Review: “Memphis: The Musical” at The New McCree Theatre is bold, vibrant, and timely

FLINT, MI — Inspired by true events, “Memphis: The Musical” is about a Black lounge singer, Felicia Farrell, and a white radio disc jockey, Huey Calhoun, who meet by chance in a club one night on Beale Street in Memphis. It the early 1950s, the birth of rock and roll and soon the civil rights movement. It is a dangerous time for a young Black woman and a white man to fall in love and they are met with great resistance from their families and the society around them (“Colored Woman”).

“I saw a post on Clio Cast & Crew [that] they were doing auditions. Nobody does ‘Memphis’! I was super excited,” said Steven Visser, Co-Founder of Light in the Dark Musical Theatre Company (LDMT). “We came to auditions and there weren’t very many people there.”

Visser conferred with partner and co-founder Joshua David Bleau and the members of their largely white cast and crew, and they answered the call-out that McCree Theatre Director Cathye Johnson had placed through Clio Cast & Crew, who provided costumes. 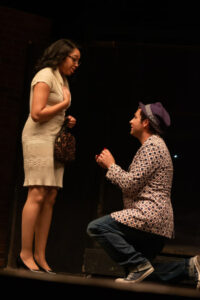 The African American members of the cast and crew of “Memphis: The Musical” are with McCree, while the white members performed for LDMT. Johnson, Bleau, and Visser co-direct this stellar production, said Johnson.

Ann Oravetz, who plays Momma to Joshua Bleau’s Huey Calhoun, laughingly calls herself the “resident old person” of LDMT’s ensemble. But what she finds sobering are the restrictive social views of her character, Gladys Calhoun. “This is not what I was raised with,” she said.

Coming of age during the 1960s, Oravetz said that there was one integrated high school and one white high school in her hometown of Pasadena, Calif. She attended the former. Thus, preparing for the role and narrow-mindedness of Momma, she said, “was a challenge.” Momma Calhoun eventually sings a song of redemption in which she and Delray, Felicia’s brother (powerfully portrayed by Daniel Lopez), agree that they have one thing in common: they are united by love and fear for the safety of their respective family members, Huey and Felicia (“Change Don’t Come Easy”).

One theme that unites both the Black and white communities of “Memphis: The Musical” is that of religion. Christianity is invoked by the white community as the glue holding anti-miscegenation in place. The R&B music that Huey Calhoun calls “The Music of My Soul” is called “race music,” “Negro music,” and worse by his white counterparts. And yet, influenced by the Reverend Hobson whose African American congregation she visits with younger white members of Huey’s radio audience and listens to the choir sing (“Make Me Stronger”), Momma Calhoun (Oravetz) is inspired to make the leap from being a “good” Christian to a loving and inclusive one. When Huey invents the phrase “Hockadoo!” as his radio signature, others wonder if the term is “dirty” and no one, including Huey, quite knows what it means. It is a subtle reminder that these are the early years of the Cold War and the ensuing political panic surrounding communism and its “Godlessness” that birthed The Crucible (1953) by Arthur Miller, as well as the McCarthy hearings (1954). In The Crucible, young girls begin acting strangely, characterized by speaking words no one understands, and their community fears them. Huey, with his inclusive stance towards race relations, also speaks a language no one in his white community understands, and his made-up word, “Hockadoo!” only punctuates this. 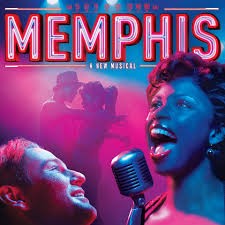 When Huey manages to lock deejay Buck Wiley (Christine French) out of their studio during Wiley’s radio program and plays the song, “Everybody Wants to Be Black on a Saturday Night,” the phones start ringing. In a backlash to the old-fashioned mores of their parents, white teenagers, it turns out, love the new music. Huey gets his first big break, and soon features Felicia Farrell (Marianna Gillespie and Michaela Anderson, respectively) on his new radio show. Together, they soar to number one in Memphis’s musical ratings (“Someday”), and Huey introduces an R&B rock and roll television dance show geared towards younger viewers (“Crazy Little Huey”). But when Felicia and Huey’s years-long discretion as lovers comes to a clear and shocking end, Felicia is whisked away by Delray to New York City where her career flourishes. Conversely, Huey’s career is in pieces and he is left to ponder what it all means (“Steal Your Rock ‘n’ Roll”).

This writer went on opening night and saw Marianna Gillespie in the role of Felicia Farrell, and again the second weekend and witnessed Michaela Anderson’s portrayal of the same. Gillespie’s Felicia seemed centered and reserved, almost smoldering; by contrast, Anderson brought a sunny, outgoing disposition to the character. Both actresses portray a Felicia that is confident and self-assured. This character knows who she is.

Bleau shines as Huey Calhoun and shared that his character’s accent as a Southern good ole’ boy was inspired when “Cathye told me she wanted an accent that was part Forrest Gump, part Tennessee.” He worked hard to get it right, partially modeling the accent after his step-father, who hails from Georgia. Bleau’s performance was steady and solid, producing a loveable and strong Huey, even when the character starts to unravel from the pressure, torn between his ambition, his love for Felicia, and most of all, his love for Memphis (“Memphis Lives in Me”). Three other characters who stood out were Delray (Lopez), Momma Calhoun (Oravetz), and Collins/Mr. Samuels/Martin Holton (Visser). All gave passionate performances, and the chemistry between these three makes their relationships believable, integral as they are to the story. Gator (Fred Fife) brings a sense of mystery and depth to the story with his self-imposed silence from the age of five, due to trauma. When he speaks, he is a voice of reason. Michael Derra juggles three characters quite well and is the alternate for Martin Holton and Huey Calhoun.

Alongside directing, Cathye Johnson performed scenic design and utilized a highly creative means of turning the set, with the flick of a wrist, from a city street to the interior of a house or a store. Using three-dimensional, cleverly painted, faux brick pillars on wheels that resembled buildings, when turned, they doubled as cupboards or windows to create a domestic scene. The club scenes are designed to be gritty (as opposed to seedy), set in downtown Memphis.

In summary, “Memphis: The Musical” at The New McCree Theatre is bold, vibrant, and timely. This musical has a solidly interracial cast and crew between two houses of production, the songs have strong leads, and the interaction and chemistry between the actors make this a show not to be missed.