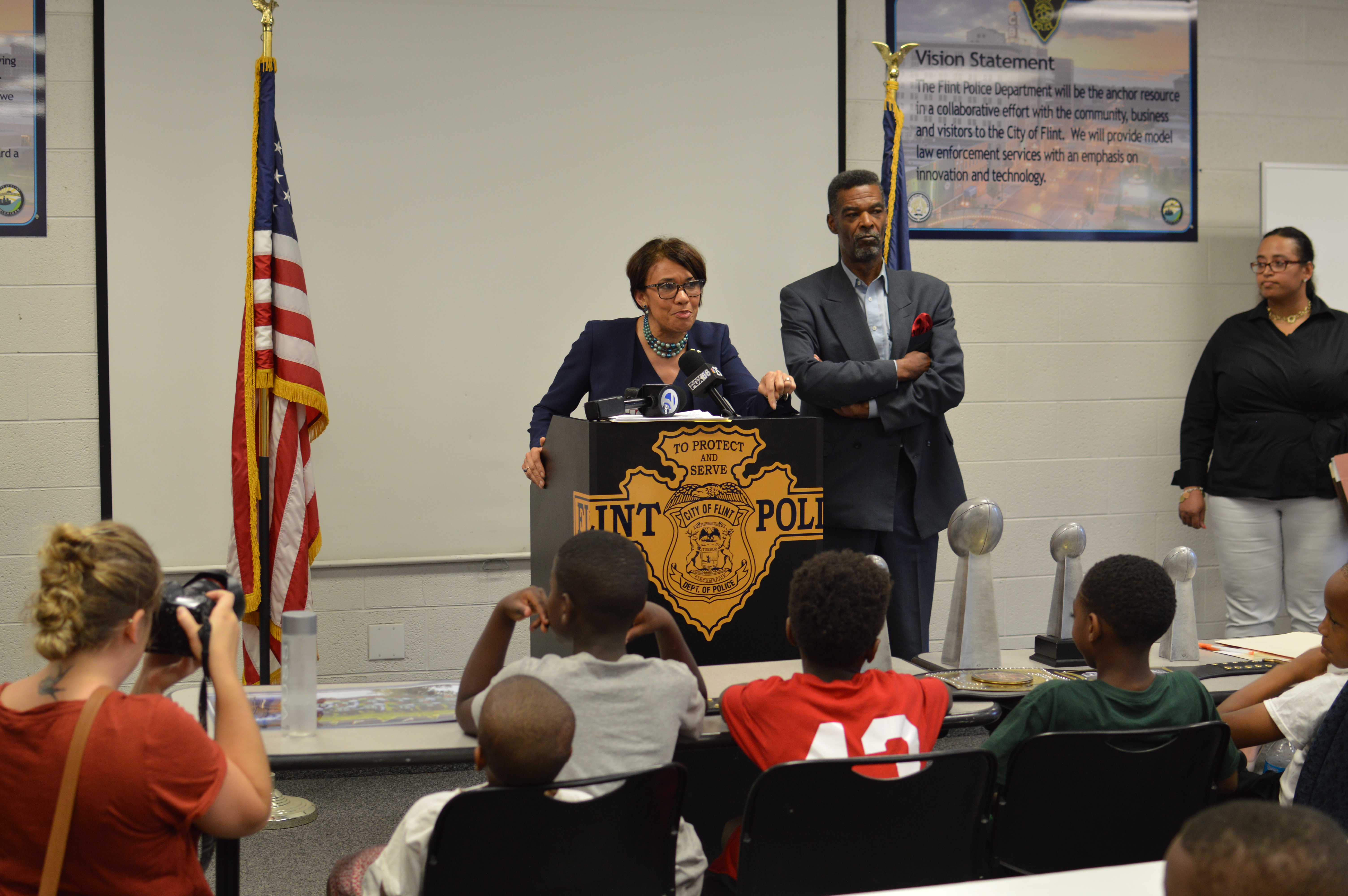 Two programs both created to serve Flint youth – One being supported by Flint City Council and another that has favor from Flint Mayor Karen Weaver’s administration.

But so far, no one knows what the future will bring for either financially. Both parties held press conferences on June 16, 2017 to address their concerns to the media regarding Police Activity League programs in Flint. 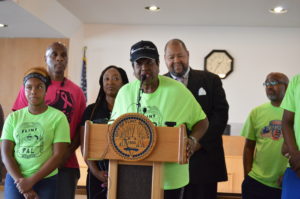 “I will fight you Mrs. Weaver tooth and nail over the health and welfare of these children,” said Councilwoman Jackie Poplar who held a 1 p.m. press conference regarding the PAL program at Haskell Community Center. “Unlike you, I’ve been a servant to the children and seniors of this community all of my life.”

The Flint City Council allocated $70,000 in Flint’s budget for the PAL program at Haskell Community Center on Flint’s north side in the Civic Park area.

Weaver vetoed the council’s move saying the program is not a city-run program and should not receive Flint funds. The council voted to override her veto in a special June 15, 2017 City Council meeting.

“We need to stop this political backstabbing,” said Weaver at the 3:30 p.m. press conference supporting a PAL program launched by Police Chief Tim Johnson on South Saginaw Street. “We need to stop undermining our chief of police and this police department. We need to support this PAL program.”

Even though the council has allocated funds for Haskell’s program, Weaver still has the option of not giving the money to Haskell.

“We cannot make her put the money in the PAL program but definitely that money cannot be spent for anything else than what the council (voted) for it to be spent (on),” said Council President Kerry Nelson. “I wish she would rethink and reconsider this because it’s all about the children.”

Weaver was not at Poplar’s press conference, she did not say whether or not she will release funds to Haskell, during a press conference she held at 3:30 p.m. with Johnson and Flint City Councilman Eric Mays who is the only council member standing in support of the administration.

“We’re looking at all of your options,” said Weaver to media. “We will certainly let you you know what we decide, which direction we go.”

Johnson has been at odds with Haskell’s board for months.

In February, their dispute was made public after Haskell’s Board President Trachelle Young issued a press release saying Johnson was trying to evict the center organizers and cut funding.

“Where this went wrong at is every penny that comes into that program should towards these youth sitting in front of us,” Johnson said during their 3:30 p.m. press conference. “Not a penny of it should go towards salaries. The money that came into this program should be spent on these youth not for salaries…and that just the bottom line. Any salary paid is money taken away from these kids.”

Johnson said in March that after a Flint Police officer was denied entry into the building he had his department sever ties with the program at Haskell ultimately launching another PAL program on the other side of town.

“We never skipped a beat,” said Johnson. “The same day (the officer) was kicked out I said find a new building.”

He also added that he disagreed with some of the funding Haskell received being used to pay salaries.

Young said that a $60,000 budget for salaries was set under former Police Chief James Tolbert for about seven employees. The highest salary was $500 per week.

“The PAL board is very disappointed in the stand the administration has taken in this matter,” said Young. “All though we’re disappointed we are determined. We are not going to stop providing these services. The only people that lose are the youth.”

Haskell’s program is funded with Community Development Block Grant Funds through the Flint Police Department and serves an estimated 55 children per day during the school year.

Young said those numbers increase to about 100 to 200 in the summer months.

Haskell’s program provides organized sports activities, mentoring, tutoring and food giveaways for needy families. The program has been run out of the building at 2201 Forest Hill Avenue since 2009 and the council’s decision would bring in funding from the Flint Police Department’s budget and not Community Development Block Grant Funds.

Johnson said his program serves about 200 children. Under his program officers volunteer to shuttle children to the south end of Flint for the program. Like Haskell, Johnson’s program also offers a number of activities including organized sports and after school programs.